As you may know, PG&E has announced public safety power shut offs for various regions around California starting from today. As of this time, Downtown Campbell is not affected by any planned shutoffs.

Posted on October 3rd, 2019 by susanblake 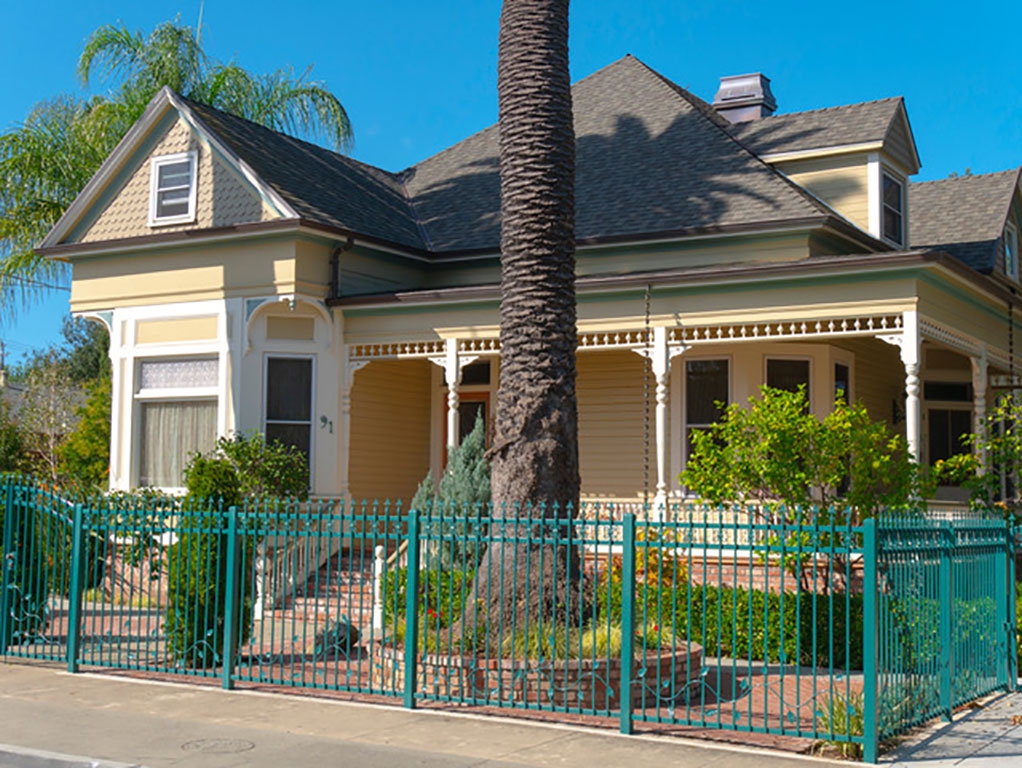 This month’s featured historic home is the James Henry and Jessie Campbell House at 91 South Second Street. It is the most significant historic home directly related to town founder, Benjamin Campbell.

Built in 1895, it sits on what was once part of a 160-acre ranch that Benjamin purchased from the United States Government in 1870. The 20,000 square foot lot was a gift from Benjamin to his son James Henry Campbell and his wife Jessie Agnes McKenzie. James used the land for dairy farming for many years, but when he married Jessie he decided to subdivide parcels.

The two-story Queen Anne Cottage style home is a fine example by local builder George Whitney who built many of Campbell’s original historic homes. Several of these homes still stand in downtown. Whitney’s attention to detail and craftmanship can be seen in the porch brackets, the turned wooden pillars and the wrap-around front veranda, and the unique cut eve shingles which was a builder’s signature in that time.

A large basement was added to the house around 1905. James and Jessie created a “milk room” under the coolest, north portion of the house, since there was no refrigeration at the time. It served as a cooling room for milk from their Jersey cows to be stored and kept for a short time. According to Jeannette Watson’s book, Campbell the Orchard City, Jessie used large pans for the milk which were placed on rotating racks. Later, the cream would be skimmed off the top and churned into butter. James and Jessie sold the milk, cream and butter to the townspeople. Benjamin Campbell and his wife Mary who lived a block and a half away on what is now Campbell Avenue, would frequently stop by.

Remarkably, this house has had only two owners. It remained in the Campbell family until the 1950’s, when Joseph P. and Connie Russo purchased it completely furnished for $112,000 from Jessie Agnes Campbell, who was now a widow. Mr. and Mrs. Russo worked in real estate and Joseph saw something unique and charming about the old house and grounds. They lovingly restored it and enjoyed sitting on the front porch watching traffic, according to their son, Joe Russo Jr.

After his parents passed away in the early 2000’s, Joe Jr. and his wife Mary Ann became the sole owners of the property when Joe’s brother who lived in Visalia declared he was not interested in it. This next generation of the Russo family has done extensive restoration, seismic retrofitting and needed upgrades to the house. While doing the seismic retrofitting to the basement, the Russo’s came across an old 7 lb. flat iron and the top of a wooden barrel. The top shows the words, “Farmers Union Campbell”.

The Farmers Union was one of the first commercial businesses in a newly created downtown business district on Campbell Ave. The Farmers Union store started in 1894. It offered free horse drawn delivery to locals, since traveling to San Jose for... END_OF_DOCUMENT_TOKEN_TO_BE_REPLACED

Posted on September 27th, 2019 by DCBA
For our 2019 Fall Wine Walk, we changed things up a little bit and mixed in handful of wineries from around the world to go with the NorCal wineries that we like to introduce to you at our Wine Walks. We also had a couple of our more popular street bands supplying a little musical entertainment for the evening. Blue House and Hootenanny are always good for a show. Thanks to all who came. We hope you had a fun evening. Photos by DowntownCampbell.com editor, Sheldon Chang.
Photos: 86 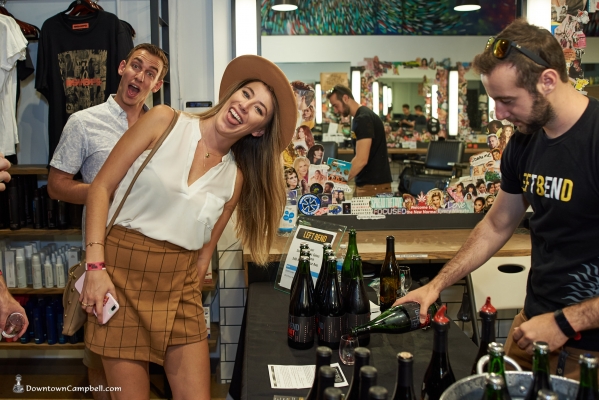 It was an unusual sight in Downtown Campbell this Monday night. Traffic was heavy and parking spaces were hard to come by even though many of the stores were closed early. Our apologies for the inconvenience, but we were honoring a friend. We didn't plan to close the street on you, but when a river of flickering candles spills into the street and drifts silently down the road, it's a road closure by any other name. We're also sorry that some who came to the event didn't get a candle. There were 500 prepared and a few more than expected showed up.

A lot of things happened on Monday night that we didn't expect. Topping that list would be that we never thought we'd be celebrating the memory of someone so important to our community with a candlelight vigil after her untimely passing at the age of 48. Kelly Young Crowley was Campbell's Citizen of the Year in 2017, a board member of the Downtown Campbell Business Association (us), and our acting President this past year. She wasn't just someone we loved and was (obviously) loved by many, but she was someone who perfectly embodied the kind of place that we are and want to be.

More than just about anyone else, she knew Downtown Campbell from all angles because she lived it. She started off waiting tables at restaurants and would eventually graduate to being the general manager of Khartoum over a decade later. Somewhere in between she owned a boutique with a friend. They were actually both still waiting tables and would take turns at the shop and then go make their shifts at restaurants down the strip.

She was kinda everywhere. Over the years, Kelly had a key role in all sorts of events and activities big and small in and around Downtown Campbell. She worked on our Wine Walks, Halloween events, toy drives, and numerous other holiday events. She's scheduled entertainment for festivals and fundraised for charities. Last year, she was the coordinator for the Carol of Lights. The list of things she's touched goes on almost as long as the line of people who came to pay their respects this week.

Downtown Campbell is a culture of many hands joining together to do awesome things. If the people and organizations that make up our community were organs, Kelly would have been the heart. To a fault, she loved her community and had a bottomless desire to give to it. She was a joy to work with, cared for others, and was never too concerned about getting enough credit for the things she did.

We are not only shocked and deeply saddened by her untimely passing, but we're also going to be dealing with how we move on without Kelly the leader, Kelly the volunteer, Kelly the cheerleader, and Kelly the friend. Tonight we will have to run our first Wine Walk without Kelly. Next month it'll be our first Halloween.

There will be many non-celebratory milestones and unwelcome anniversaries. We hurt, but in honor of our dear friend, we take it one day at a time and will do our best to... END_OF_DOCUMENT_TOKEN_TO_BE_REPLACED

Posted on September 23rd, 2019 by sheldon
The Teal Run for Ovarian Cancer Awareness is event that takes place in Campbell Park to raise money for Ovarian Cancer causes and to celebrate survivors and remember those lost to Ovarian Cancer. The 5th annual running of this 5K race/walk was held on Sunday, September 22nd, 2019. If you missed this year's event and you'd like to help with their cause, you can still donate to this year’s event or find out how to participate next year at thetealrun.org . The photos here are highlights from our photo set for the event. Additional photos will be published by the... END_OF_DOCUMENT_TOKEN_TO_BE_REPLACED
Photos: 81

Posted on September 18th, 2019 by sheldon
On every Wednesday night leading up to the "Thrill the World" Zombie Crawl in Downtown Campbell, Adira Dance and Costume in San Jose holds training sessions to teach you the moves from the Michael Jackson Thriller dance. It's definitely a challenge to get the moves down, but it also sure seems to be a lot of fun too. If you want to learn the dance and be a part of the Zombie Crawl Dance Mob that takes place on October 25th this year, you can go to any of the remaining sessions. There are also online videos you can view... END_OF_DOCUMENT_TOKEN_TO_BE_REPLACED
Photos: 28 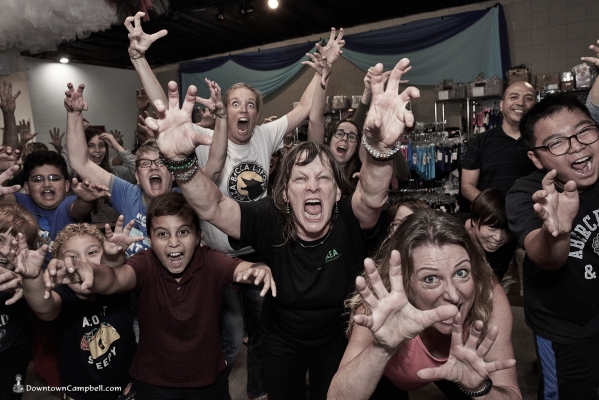 Posted on September 5th, 2019 by DCBA
If you're a fan of watching or playing eSports, you now have a place in Downtown Campbell to feed your obsession. The place that was formerly AFKgg Gamer Lounge in Downtown San Jose has reopened as AFKxp Tech + Game Center above LvL Up in the "Gaslighter" building. They'll be having regular watch eSports watch parties for popular games and gaming teams. Their very first watch party event was an Overwatch party that brought out fans of our local SF Shock who were playing against Seattle. When they're not hosting watch parties, AFKxp is a comfy spot to relax and... END_OF_DOCUMENT_TOKEN_TO_BE_REPLACED
Photos: 16

The next featured Landmark home is the J.C. Ainsley House (No. 2) at 112 N. Second Street. This classic Queen Anne Victorian Style house was built before 1900. It once stood at the site of the Ainsley Cannery on N. Harrison Avenue. When the cannery needed to expand in 1919, the house was moved by a capstan arrangement using a horse for power to its current location. It was moved a block at time in this manner. It moved south on Harrison to Campbell Avenue then to Second Street. This was the Ainsley’s second home in Campbell. It became their son Gordon Ainsley’s home in 1924, when J.C. Ainsley’s third and final home was finished on the corner of Bascom and Hamilton Ave.

This house is defined by its projecting second story gables and extensive entrance porch on the first floor that wraps itself around the corner of the house. It is embellished with a few decorative elements such as its horizontal shiplap siding, French doors, brick chimney and symmetrical placing of windows. It is a fine example of the Queen Anne Style, showcasing good design, composition and craftsmanship, and it retains most all of its original materials and design features.

In 1964, Thomas and Audrey Tuttle purchased the house from Mrs. Alice Cowdrey, an active member of the Campbell Methodist Episcopal Church in Downtown Campbell.

At that time, four bedrooms on the second floor of the house had been transformed into a separate apartment with its own bath, kitchen and back stairs entry. The Tuttles were raising ten children and quickly returned the apartment to its original design. All of their children went on to graduate from Campbell High School. Now in her 90’s, Mrs. Tuttle still lives in this wonderful house.

Check out the archives for This Place Matters for more stories about Campbell's historic homes.

AFKgg Gamer Lounge's is Back! 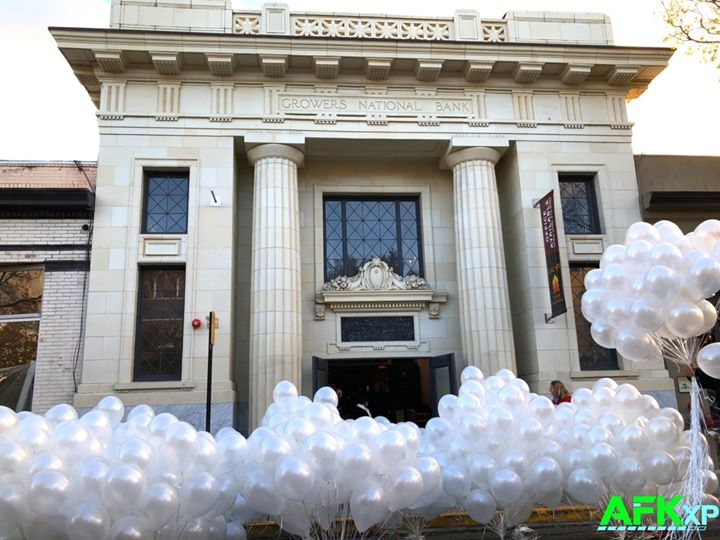 AFKgg Gamer's Lounge that was formerly in Downtown San Jose is back as of this weekend! It's now AFKxp in Downtown Campbell and it's upstairs of LvL Up Arcade/Gastropub in the old "Gaslighter Theatre" building. It'll be the perfect pairing of a PC/Console gaming lounge upstairs with Coin-op gaming downstairs.

Saturday 8/24 is your first chance to check out the NEW #AFKxp location in Downtown Campbell!

KHARTOUM IS HIRING!!! We’re looking for some hard working and motivated individuals to join our wait staff!! Shifts available Thursday through Saturday nights. Looking for regular shifts with fill in opportunities as well. If you or anyone you know may be interested, let us know or stop by and drop off a resume!

24 Karat Skin Care?
This Place Matters: The Gilman House
Evelyn and her Vintage Ties at Christmas in Campbell