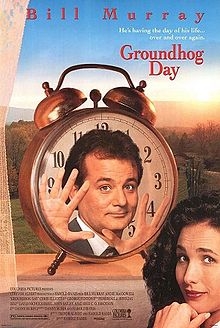 By tradition, the final movie of the Sundown Cinema season is a movie chosen by the audience. After an extensive nomination and voting process, the people have spoken, and this year's finale will be Groundhog Day (1993) starring Bill Murray and Andie MacDowell!

In this hilarious comedy directed by Harold Ramis, Murray plays a self-centered TV weatherman who, while on assignment covering the annual Groundhog Day event in Punxsutawney, Pennsylvania, suddenly finds himself in a time loop, doomed to repeat February 2 no matter what he does.

Sundown Cinema's presentation of the Audience Choice Film is brought to you courtesy of Tiny Tots Diaper Service & Baby Boutique in Downtown Campbell.

Where & When: Movies will be shown outdoors in the parking lot next to Orchard Valley Coffee near the corner of E. Campbell Ave. and Central Ave. Start times for each movie will depend on when the sun sets. Shows usually begin between 8 and 9pm, once it's dark enough to see the film. Don't forget to bring a chair and a blanket! No alcoholic beverages and no smoking, please.