This Place Matters: The Arnott House

The featured landmark home this month is the Ed Arnott House at 155 Alice Avenue. Built in 1922, this house is a fine example of the Craftsman/California Bungalow style with many character defining features. It has a broad, closed veranda style porch supported by brick and stone pillars and unusual stacked wooden brackets at the top. An additional open porch can be seen on the west side of the house. Its low-pitched roof is supported by projecting eaves and exposed roof rafter tails. Large transom style windows frame the front door with many small divided- light, casement windows on either side of the chimney and the side porch. The house also has a small finished basement.

The current owners said that they found several old-double hung windows along with heavy weights in the basement when they started their renovation efforts. The original front door went missing over the years and when they bought the home in 2012, the existing hollow core front door was in bad shape and unsafe, with gaps that let light and wind through it. They replaced it with a new, solid fir door in the Craftsman/Bungalow style that matches interior molding woodwork.

The Peter Paul Arnott and Son’s Lumber Yard was one of the early 1900’s businesses in downtown Campbell. Along with lumber, Peter and his son Ed helped provide cement building blocks for foundations, chimneys and basements. They were kept busy as the newly created downtown business district on East Campbell Avenue grew rapidly. (See photo)

However, on October 27, 1917, a disastrous fire quickly swept through the downtown community and destroyed many buildings including the house of E.A. Arnott according to Jeanette Watson’s book, ‘CAMPBELL the Orchard City’. Although not much is known about the Arnotts, one can surmise that the Ed Arnott House on Alice Avenue was built using materials that were readily available from the family’s business.

Alice Avenue, now part of a historic district, was created in 1915 on a portion of the site of fruit drying yards owned by the George E. Hyde Company, a canning and fruit dehydrating plant occupying 17 acres in Campbell. This residential subdivision named “Hyde Residential Park” was built primarily for housing cannery workers, though George and Alice Hyde (the Street’s namesake) resided there too. 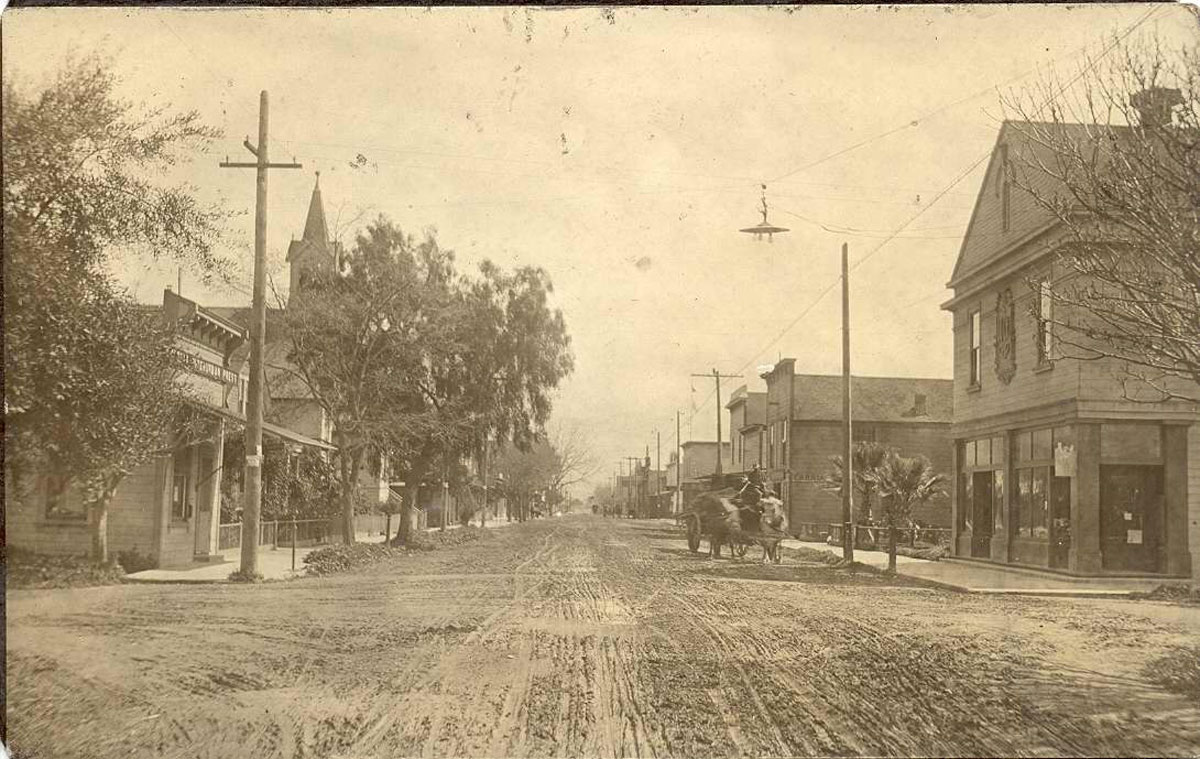 Campbell Avenue looking east at the corner of First Street, 1905-1910. On the right side of the street is the newly constructed Odd Fellows Hall, Peter Arnott’s residence (with palm trees) and Al Smith’s Auto Shop where the fire started that wiped out the entire block of buildings.

Want to learn more about Campbell’s Historic buildings? There’s a free app for that. Search for: Historic Campbell, available for both Android and Apple.

Check out the archives for This Place Matters for more stories about Campbell's historic homes.