Treat your body well and your body will treat you well. The objective of KWENCH is to provide a fresh, healthy drink, free of additives. They are NOW OPEN in Downtown Campbell with their second location.

KWENCH Juice was inspired by the founder's struggle to provide fresh healthy and nutritious juices for her father who was terminally ill with cancer and could not ingest solid food. Unable to find juices made from freshly cut fruits and free of preservatives and other additives, she began to prepare her own juices to give her father the healthier alternatives she was unable to find.

Posted on June 8th, 2015 by SimplySmashing

It's the Pre-Sidewalk-Sale SALE at Simply Smashing, with a huge selection of Simply Smashing style! Items $65 each (up to 85% off), sales tax included. Cash only - no credit/debit cards. Monday, June 8 through Friday, June 12, 2015.

Joint Study Session on Mixed Use Construction in Downtown Campbell 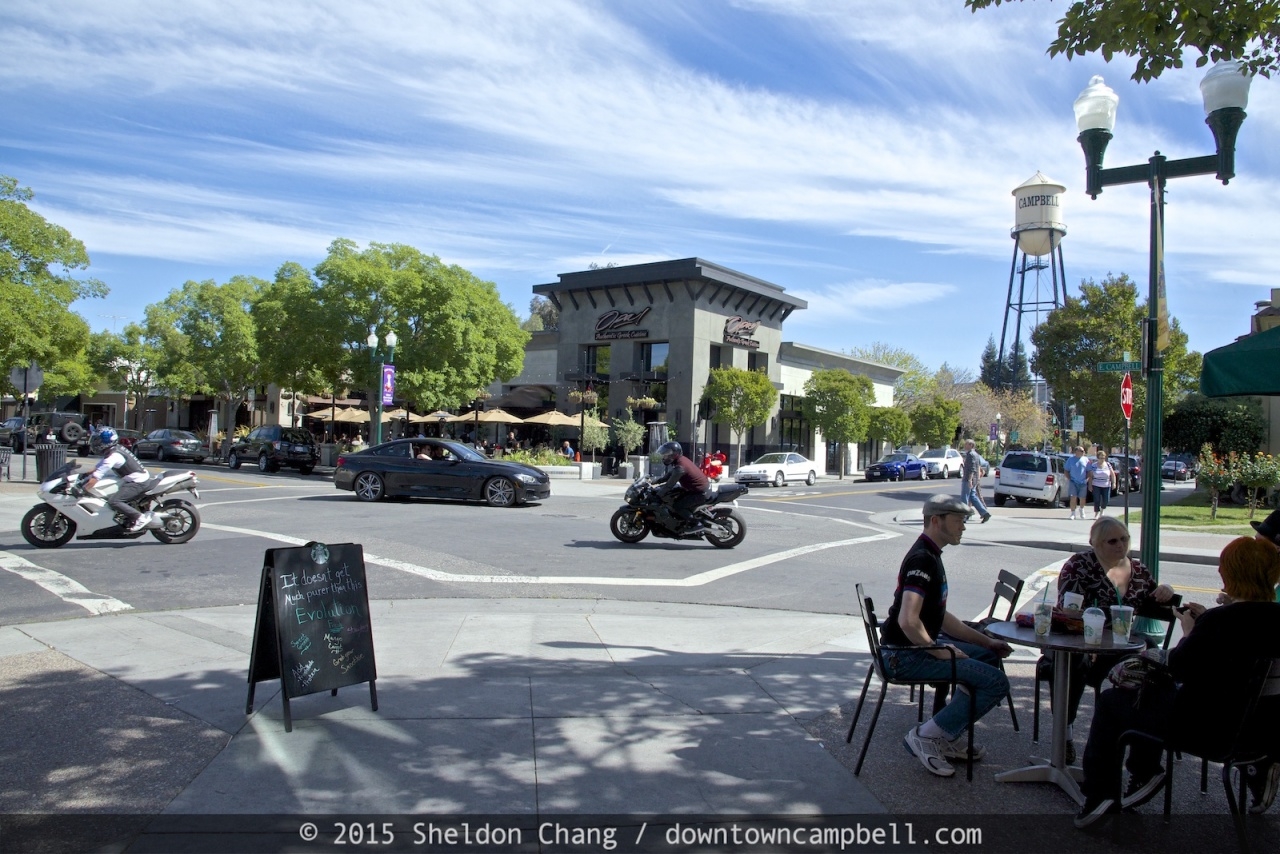 Things are changing in Campbell and there's a chance for Campbell residents to be heard about how we stay rooted in our strong community traditions while also being a vibrant modern place to live, work, and play.

On June 16 at 6pm, the Campbell City Council and the Planning Commission will be holding a joint study session to discuss mixed use construction in Downtown Campbell. This discussion will also be televised and viewable at a later time.

Topics that will be covered include the bar/restaurant to retail ratio and ideas that can make an already thriving Downtown even better.

The session will take place on June 16th starting at 6pm in the Campbell City Council Chambers. The public is invited to attend. This is an ongoing discussion. You can find meeting minutes from past sessions here:
http://www.ci.campbell.ca.us/agendacenter

A Summer of Change for DowntownCampbell.com 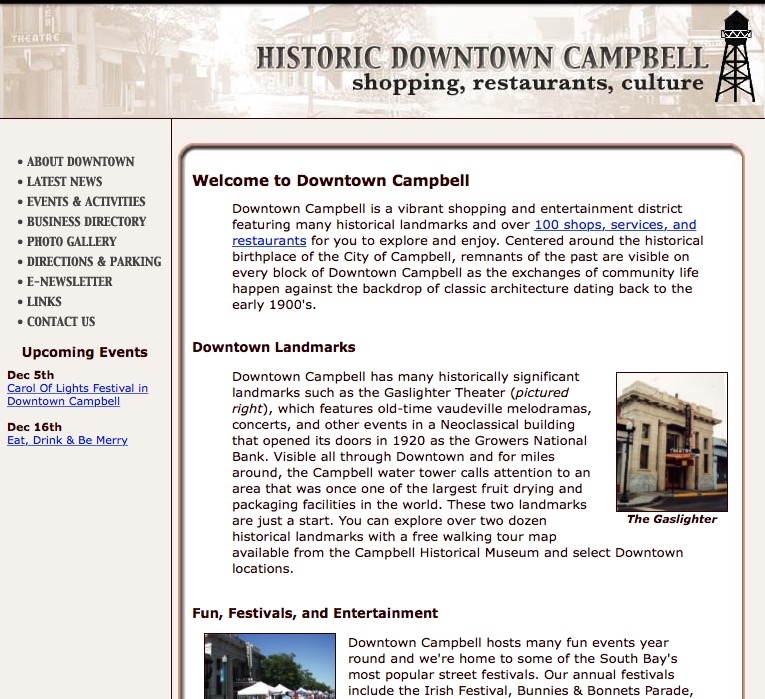 As you might have noticed, the photos in the masthead for DowntownCampbell.com have finally changed after being the same for far too long. This is just the start of some welcome updates that you'll be seeing to this website throughout the course of this summer and into the fall.

The screenshot that we've attached to this post is what the DowntownCampbell.com website looked like in 2004. That was the first generation of downtowncampbell.com in its current format as a collaborative platform with news and information from many different businesses and community interests.

Much has changed in Downtown Campbell since those days. It's hard to believe, but in 2004, Downtown Campbell was still a place where you went if you were trying to score a find on an antique or you wanted to pick up rodeo wear. For 2004 and for many years after that, the Downtown Campbell website was rather advanced. It's worked well, but it's time to catch up with the times and again be the kind of site that other districts want to copy.

A lot of changes have already been made under the hood over the past six months and soon you'll start to see more noticeable new additions that will help us create a more unified experience of Downtown Campbell between the website and its various social media properties. You might not be able to tell from just looking at the website, but we have active Facebook, Twitter, and Instagram accounts for those who prefer to get their information one way or another.

This will take time though. Despite appearances, Downtown Campbell doesn't have a big operating budget. We're the "Little District that Could." We're run by volunteers and people doing things in their spare time. Everyone punches above their weight to make all of this happen. That's ok with us though. This is one of the reasons why we are what we are.

If you have any suggestions for improvements that you'd like us to take into account, please email us at [email protected].

California Repercussions Marching Band at Boogie on the Avenue

Wasn't The California Repercussions Marching Band awesome at Boogie on the Avenue?

Get 50% Off at Simply Smashing!

Newsflash! Check out Simply Smashing's fab 50% Off Sale Section ... nearly 100 square feet of our boutique, filled to the brim with Simply Smashing Style at HALF PRICE! Now through Sunday, May 17, 2015. Don't miss it, daaahlings!

We've Got the Warriors Games on in Downtown Campbell

Warriors fans we've got the game on in Downtown Campbell! Throughout the 2015 NBA Playoffs, you can come Downtown and keep up with the latest action at many of our restaurants, bars, and shops. Here's just a partial list of places that will have the game on. Some places may not have audio on.

Khartoum (Bar)
Special: Buy a $10 Warriors glass and draft beers are 1/2 off during Warriors games!

Liquid Bread (Gastropub)
Sound on in back patio seating only.

Update on Sundown Cinema in Downtown Campbell for 2015 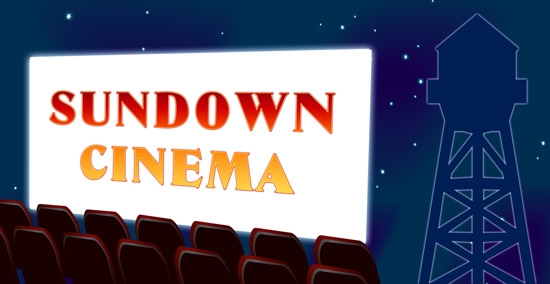 This is Sheldon Chang, one of the organizers of Sundown Cinema. I’ve been putting off writing this message because it’s not the message that I wanted to be writing at this time of year.

We’re going to be without summer movies in Downtown Campbell for another year. The reason this year is mostly due to personal reasons for me. Sundown Cinema is a huge commitment as an organizer and I wouldn't be able to fulfill the role I would need to fill to make it happen and happen in a way that I want it to. This is especially the case since we would need to get used to running the movies series in a new location.

I can’t really say one way or another what the possibility for summer movies looks like next summer except that it’s something I still very much want to see happen and something that my co-organizer, Jim Aspinwall, would like to see happen. We face some pretty stiff challenges in getting the movies rolling again, but the desire is still there so we're not ready to say we're done yet.

A number of people have asked how they could help to increase the chances that we'll be able to do this next year. The main thing that we're missing are people who have the skills and the commitment to help with the technical end of things. These are things like setting up and running the sound and projection. The ability to commit for at least five or even all ten weeks of our usual ten week run is very important. It doesn't do us much good to have a core person drop in for one or two nights.

We'll also need to restock our list of volunteers for all positions so if you might be able to help as a greeter, concessions person, clean-up person, etc.; I'd like to invite you to sign up for the Sundown Cinema mailing list. When we want to call for volunteers, we'll hit up that email list to see what we've got.

The list of volunteers also extends to replacing or sharing the duties for both me and Jim. I'm the event organizer and administrative lead. Jim Aspinwall is the tech lead. If the idea of being one of our main organizers appeals to you, let us know directly at [email protected].

This will be our third summer without movies after there were nine straight years of a full summer movie schedule between us and the original organizer of Sundown Cinema. Keep your fingers crossed and hope that the stars line up right next year.

Posted on May 1st, 2015 by SimplySmashing

At Simply Smashing Boutique, our amazing spring and summer styles keep coming and we need to make more room. So our spring sale just got real...Super Real! 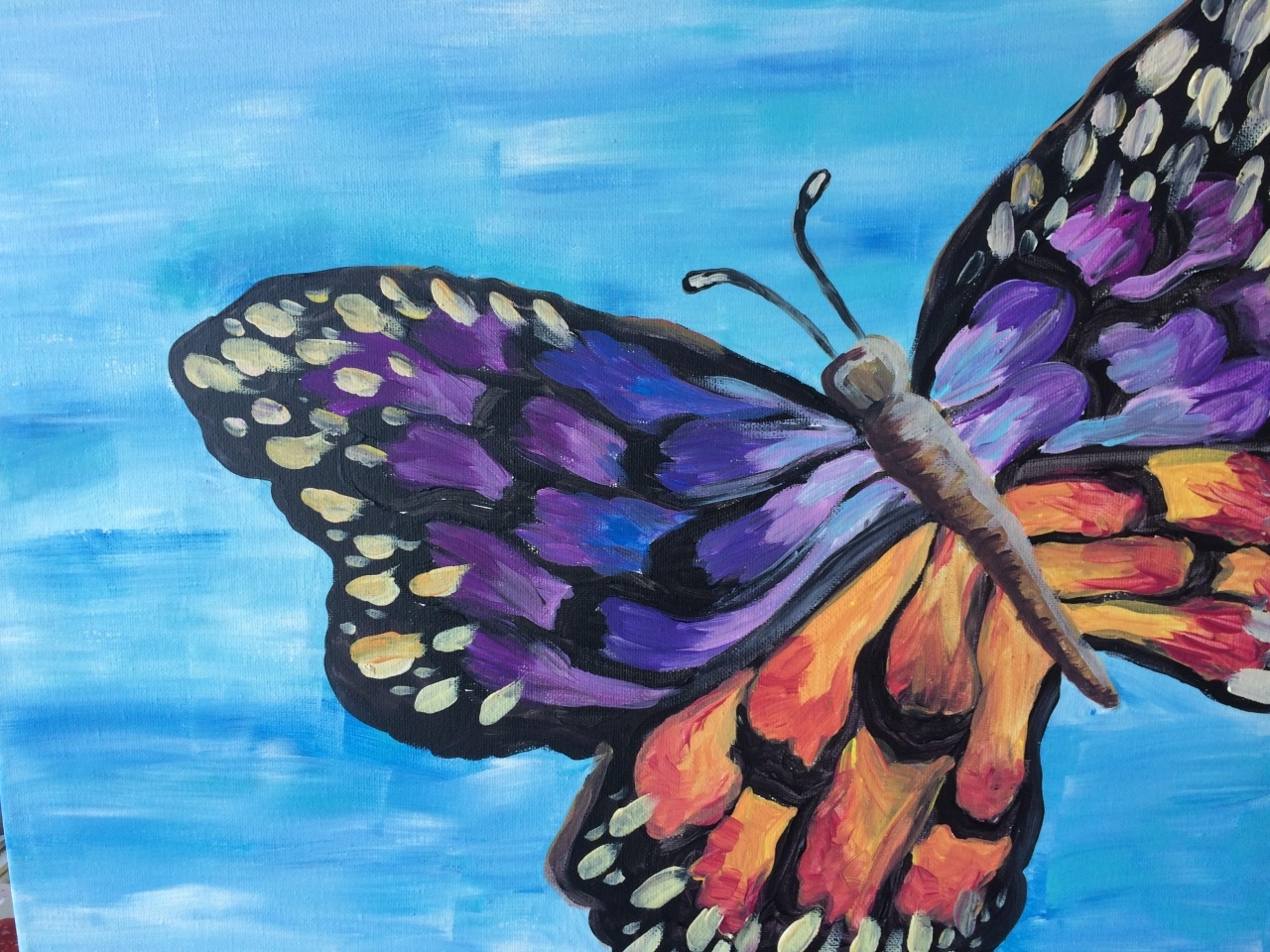 The Art Beat is pleased offer Canvas Nights the second weekend of every month! Our instructor will guide you step by step to create an amazing masterpiece! Absolutely no experience is necessary. So grab a friend, family member, coworker or neighbor and come down to an actual art studio for a relaxing evening with art and music.

$35 per person for the evening.
Reservations are required.